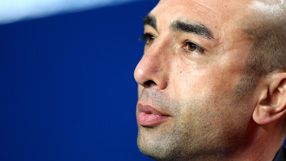 The 42-year-old's astute tactics, mixed with plenty of luck and some resolute defending, secured a 1-0 win over reigning European champions Barcelona at Stamford Bridge in the first leg of their semi-final on Wednesday.

Despite Barca enjoying 72 percent possession and 19 attempts on goal, Chelsea's victory, coupled with their 5-1 thrashing of London rivals Tottenham Hotspur in the FA Cup semi-final on Sunday, have put Di Matteo's men within sight of two trophies.

Six weeks ago, under former coach Andre Villas-Boas, the only thing that looked like arriving at Stamford Bridge in May was a new broom to sweep away what the sacked Portuguese boss had regarded as dead wood.

Di Matteo took over on an interim basis on March 4 and immediately set about restoring confidence and self-belief, especially to some of the senior players who had publicly criticised Villas-Boas following a poor run of results.

He installed Lampard back in midfield, enthused Torres with a new-found belief which has seen him start scoring again, and restored a team spirit that had all but dissipated under Villas-Boas.

After Wednesday's win, which came courtesy of a Drogba goal just before half-time, Di Matteo said: "In the past, a lot of people have had the opinion that our boys were over the line and too old to play at this level.

"It was not just Didier, but a lot of players in our squad, that they said couldn't play two games in such a short period of time. They gave their answer on the pitch."

Since he took over, Chelsea have won 10, drawn two and lost just once in 13 matches but Di Matteo refuses to be drawn on his prospects of taking the job permanently.

Many experts predict that Barcelona will recover and reach the final in Munich next month, but even if they do, Chelsea's billionaire Russian owner Roman Abramovich would be taking a huge gamble in replacing Di Matteo at the end of the season.

While it has been widely reported that Abramovich wants Barcelona's manager Pep Guardiola to coach his side or some other "big name", the Russian may have the answer to his dreams of winning the Champions League already in place.

That may happen this season but under Di Matteo, Chelsea are showing glimpses of the heights they touched when Jose Mourinho was manager and which brought them successive Premier League titles in 2005 and 2006.

In many ways, Di Matteo does seem a perfect fit for Chelsea.

Clearly respected by his players, he made 175 appearances and scored 26 goals for the club before his career ended prematurely at 31 when he suffered a triple leg fracture in a UEFA Cup tie against St Gallen of Switzerland