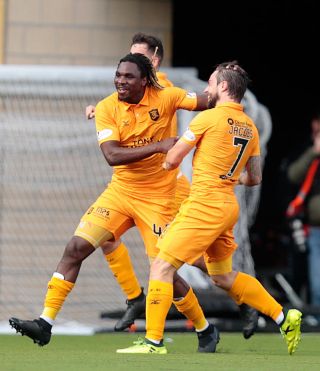 Livingston will welcome striker Dolly Menga back to the club next week after recalling the striker from his African loan spell.

The 26-year-old left for Angolan side Atletico Petroleos de Luanda in the summer on a season-long deal after netting twice for Livi last term, including a winner against Rangers.

Menga wanted to boost his Angola international prospects and played in the African Champions League.

But Livi have called him back, although he will not make it to Scotland in time to feature in Saturday’s Ladbrokes Premiership visit of Motherwell.

A Livi statement read: “The club were of the belief that a return to West Lothian was in the best interest of both Dolly and Livingston FC and took the decision to activate the recall clause in the loan deal.

“Dolly is due to arrive back in the country shortly and will hook up with his team-mates for training next week.”