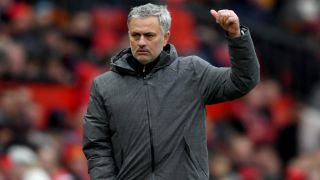 Former Manchester United goalkeeper Mark Bosnich urged the club to show patience with Jose Mourinho, telling the Red Devils not to be drawn into regular changes like rivals Liverpool.

In his second season in charge at Old Trafford, Mourinho failed to deliver a trophy, but United finished second behind record-breaking rivals Manchester City in the Premier League.

That came a campaign after Mourinho led United to a Europa League and EFL Cup double.

Bosnich, who had two spells at United, says the Portuguese tactician needs more time and the club should avoid following Liverpool's lead, the Merseyside giants having made numerous changes in their bid to win a first league title since 1990.

"Just stand by him [Mourinho]. Give him the opportunity, he is second against a team in Man City who can afford anyone and get anything," he told Omnisport and Goal.

"Like I said to you, sometimes, even after such dominance, you have got to be patient.

"You don't want to fall in a situation like Liverpool, after all those years of dominance and then all of a sudden you want to chop and change.

"Stick with this guy, he is a winner and he will bring the glorious times back."

"I feel privileged to work with such a fantastic group of boys."Jose's pride in managing - head this way to hear more from the boss: January 25, 2018

Bosnich recalled similar impatience at United under the great Alex Ferguson, who led the club to 13 league titles in 27 years.

"What everyone has got to realise is that not last season but the season before, they won three trophies [United also won the Community Shield]. That is an amazing achievement no matter where you are at," Bosnich said of Mourinho's United.

"This season? Okay, no trophies but far more points than last season and in second place. It takes time.

"People have short memories. I was at Manchester United in 1990, I think Fergie had only been there for four years, there was a game against Crystal Palace in the season that they won the FA Cup. Half the crowd sat down because he left Mark Hughes on the bench. They were calling for 'Fergie out'.

"He went onto win the FA Cup, ironically against Crystal Palace that year. The rest, as they say, is history."