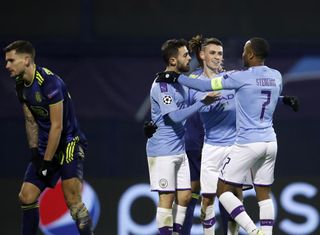 Pep Guardiola hailed the performances of Gabriel Jesus and Phil Foden after Manchester City eased to a comfortable 4-1 victory over Dinamo Zagreb.

Brazil striker Jesus netted a hat-trick and Foden also got on the scoresheet as City wrapped up their Champions League Group C programme in style on a freezing night at the Maksimir Stadium in Croatia.

Jesus has now scored five goals in three games as he deputises for the injured Sergio Aguero.

Guardiola said: “We are incredibly delighted with Gabby. A striker needs goals and he scored three. Hopefully it can help his mood to be incredibly positive.

“Gabriel is an incredible fighter, how he helps us to defend and does absolutely everything, but a striker needs goals and that is important for him, for the team, for everything.”

Foden, who also claimed an assist, made the most of a rare start in the absence of David Silva.

Guardiola said: “He was so good. I think he’s a player when he is close to the box, who is more dangerous than away from the box.

“He still has to learn a bit away from the box, for the tempo and speed, but when he played close to the box he can attack central defenders and he’s incredibly dangerous. He played really, well.

“England have an incredible generation of young players. For the next decade England has incredible players and it’s good for the country.”

City were hit by a stunning early goal from Dani Olmo and their equaliser was controversial as two players went down injured in the build-up.

Guardiola said: “I think Riyad (Mahrez) didn’t see the player on the grass and I think the referee took the decisions he should take.”

Guardiola did not complain after Rodri was elbowed in the face by Amer Gojak.

He said: “It was contact with the opponent but he is strong.”

However, after Gojak went unpunished by referee and VAR, Guardiola did hint that he was unhappy with the role of the video official.

He said: “On VAR I was a big fan and I will try to continue to be a big fan in the future.”

City, who had already qualified for the last 16, finish the group unbeaten with 14 points.

Guardiola said: “We didn’t play for points, we played for ourselves. It was important to finish in that way, and with no injuries or yellow cards.

“We will now focus on the Premier League and other competitions and see in what condition we are when we arrive in February.”

Dinamo had gone into the game with hopes of making the last 16. Had they held onto their lead they would have gone through but the defeat instead condemned them to bottom spot and also denied them a Europa League place.

Coach Nenad Bjelica was unhappy with City’s equaliser but did not blame the visitors.

Asked if play should have been stopped, he said: “I see it the same way, but we maybe should have reacted in that situation better because three opponents were on one of ours. I don’t think the opponent did that on purpose.

“We are sad our European campaign is at an end but I am proud and happy for everything we showed in these six matches.”