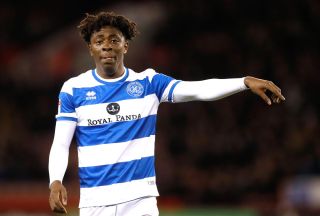 QPR fans were coming to terms with the idea that playmaker Ebere Eze was set for a big-money move away from Loftus Road.

His undoubted Premier League potential had led a series of top scouts to west London, eager to run the rule over the 21-year-old who has been attracting increasingly rave reviews.

Here, the PA news agency takes a closer look at the Rangers man.

How did he rise through the ranks?

Debut!… Every disappointment is a blessing in disguise 🙏🏾⚽️ pic.twitter.com/ZCH7BPDAfY— Ebere (@EbereEze10) January 7, 2017

Youth football was far from plain sailing for Eze, and a number of clubs are now counting the cost of letting the player slip through their grasp. He struggled upon being released by Arsenal as a 13-year-old, and endured unhappy spells at Fulham and Millwall as he began to seriously consider quitting the game to go to work in a supermarket. But Eze impressed then QPR boss Chris Ramsey during a trial in 2016 – and the rest is history.

What makes him so special?

Eze is convinced he struggled in his junior career because too many coaches took his easy-going style for an inherent laziness. Ramsey took a different approach and that belief has been replicated by Rangers boss Mark Warburton, who has given him freedom to express himself fully in his number 10 role, despite his relative lack of experience. Warburton’s confidence has paid off handsomely, with 11 goals this season and a host of high-profile assists.

And on the international front?

Eze made his international debut for England under-20s in October 2018, and for the under-21s the following year. However, Eze is also eligible to play for Nigeria, and the Super Eagles have publicly expressed their interest, with Nigeria Football Federation president Amaju Pinnick dangling a considerable carrot by announcing his desire to see Eze form an integral part of his country’s World Cup campaign in Qatar in 2022.

🗣 @EbereEze10 enjoyed his #WOLvQPR appearance despite it being the toughest match of his fledgling #QPR career. pic.twitter.com/Yw34O250x3— QPR FC (@QPR) February 11, 2018

Eze’s days at Loftus Road may be numbered. Tottenham are the club most frequently linked with the player but Chelsea have also been keeping close tabs, and Sheffield United too have been linked. With QPR showing few signs of shaping up into play-off contenders if and when the season resumes, Eze could be on his way sooner rather than later. After all, QPR’s own director of football Les Ferdinand described the player as someone who is destined for a “top six” club.