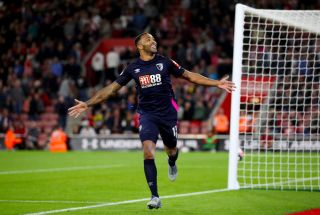 Wilson has again been rewarded for his consistency with another call-up to Gareth Southgate’s squad for the upcoming Euro 2020 qualifiers against the Czech Republic and Bulgaria.

The 27-year-old has scored five Premier League goals so far, and reports have suggested he will be on Manchester United’s wanted list when the transfer window opens again in January.

Howe, though, will not let rumours about what might or might not develop over the coming months as he prepares for Sunday’s trip to Arsenal.

“I take with a pinch of salt, to be honest, at this stage of the season,” Howe said when asked about the reports around Wilson’s future.

“There is nothing that we can do, that Callum can do, other than perform well. That influences rumours and things like that at this stage of the season.

“He has just got to focus on his next game and give his best for this club.

“To hear transfer links and rumours at this stage when the window is shut and a long way from being open, for me, it is pointless talking about it.”

Wilson was signed from Coventry in 2014 and has overcome serious injuries in both knees. Howe feels he again merits continued international recognition.

“It (England call-up) is deserved. I think he has had a good start to the season,” Howe said.

“I think with Callum we have just been focusing on his performances and making sure he delivers what we need for the team.

“On the back of that, we have always said we feel he will score goals if he gets the finer points of his performance right.

“I think he has and now he is in a confident mood – that is a great sign for us and for him.”

Bournemouth head to Arsenal looking to extend their three-match unbeaten run in the league, having drawn 2-2 with West Ham last weekend.

“We are in a good place, but we know from our experience that things can change quickly so we have to be ready,” Howe said.

“I feel that there is more to come. We are doing something right, I think the spirit in the group has been very strong and that is why we have got the results we have.

“If we can improve technically then we can be even stronger.”

The club have seen revised plans for a new training complex agreed by Bournemouth, Christchurch and Poole Council’s planning committee. Howe believes the move is a “huge step”.

“I have been saying for a long time how important this is for the future of the club, for the next generation of the players, it means everything,” he added.

Meanwhile, defender Chris Mepham has withdrawn from the Wales squad because of an unspecified injury.