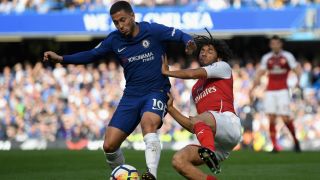 Antonio Conte has suggested he is ready to give Eden Hazard his first club start of the season when Chelsea take on Nottingham Forest in the EFL Cup on Wednesday.

The winger's preparations for 2017-18 were heavily disrupted by a broken ankle suffered while on international duty back in June.

Hazard has been steadily working his way back and the 20-minute appearance off the substitutes' bench in Sunday's 0-0 draw against Arsenal at Stamford Bridge was his third for Chelsea this season.

He has also played in two games, one of which was a start, for Belgium in World Cup qualifying this season and Conte is set to play him from the start for the third-round tie at Stamford Bridge, after which he feels the 26-year-old will be back at 100 per cent.

"Now, on Wednesday, he will have the possibility to start the game against Nottingham Forest and complete his recovery. We hope that everything is OK after this game."