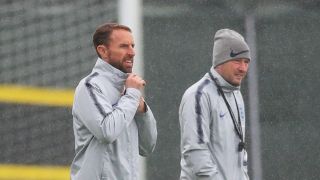 Gareth Southgate has dismissed suggestions from Sweden that his England players are entitled ahead of Saturday's World Cup quarter-final showdown in Samara – insisting hard toil has been a vital ingredient of their run in Russia.

Former Sweden international Hakan Mild labelled Southgate's youthful squad as "spoilt children who earn a lot of money" earlier this week and noises coming out of Janne Andersson's camp have broadly amounted to a feeling England may not be able to cope with their battling qualities.

There was a suggestion of irritation over this strand of pre-match build-up on Thursday, when John Stones told a news conference, "I want to say something but I can't" after Swedish attempts to pile pressure on England were put to him.

But while performances at the time and the benefit of hindsight suggest the now-maligned "Golden Generation" of England players that drew with Sweden at the 2002 and 2006 World Cups were legitimately open to such claims, the current crop under Southgate appear to be cut from a different cloth and the manager launched a staunch defence of their character.

"We're not a team where we just turn up and we're waltzing around, strolling around and we've got an entitlement," he told reporters, before referring back to the lower-league roots that have helped to shape a number of his players and staff.

"We're lads who have come from Barnsley and Leeds and Bolton and Blackburn.

"That's so important for us on Saturday because I always think Sweden like to point out we're paid this and that, and we're the team of entitlement, when I don't think that is the case for this group.

"It's important we remember [assistant coach] Steve [Holland] was at Crewe. I was at Crystal Palace when they weren't quite as good as they are now. We've scrapped and fought our way.

"Most of our boys have played in the Championship or lower, whether they started there or played on loan there. They are really important messages for us.

"We are having success because we are really grafting for each other, we are playing some good football but we are really working without the ball.

"No passengers, nobody failing to close down, nobody strolling around. That's the bedrock of why we are getting some decent results and we have to continue doing that."

These are qualities that have helped this England team close a distance with their public that seemed firmly entrenched after a succession of recent tournament failures.

"It's nice within football to affect some things and the players have that opportunity as well because they have a voice and they have influence on young people, especially the young people from the areas they came from," Southgate added. "They can give hope to them."