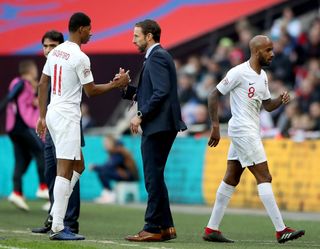 The Three Lions will take part in the inaugural competition finals next month, when they will attempt to overcome Holland and reach the final against hosts Portugal or Switzerland.

Southgate will announce his squad for the Nations League on Thursday afternoon at Wembley, ahead of which the England manager and his assistant plan to take in four matches over the coming days.

Press Association Sport understands that assistant Steve Holland will be at Crystal Palace’s match against Bournemouth after taking in the Sky Bet Championship play-off clash between Derby and Leeds on Saturday.

Southgate will go to see Jadon Sancho’s Borussia Dortmund take on Fortuna Dusseldorf on Saturday, before going to the clash between United and relegated Cardiff.

Instead of the eagerly-anticipated games involving Liverpool and Manchester City, the England manager has chosen run the rule over a number of players at Old Trafford on Sunday.

Jesse Lingard has missed the last two matches and has been struggling for fitness recently, while Marcus Rashford’s form has dropped markedly as United stumbled towards the end of the season.

Southgate will be hoping to get a look at Phil Jones and United’s player of the year Luke Shaw, although fellow left-backs Ben Chilwell and Danny Rose now look ahead of him in the pecking order.

United players will be able to link up with England fresh for the start of Nations League preparations given their season ends on Sunday, unlike the rest of the top six.

Manchester City have the FA Cup final against Watford on May 18, while Arsenal and Chelsea meet in the Europa League final at the end of the month.

But most disruptive match is the Champions League final between Tottenham and Liverpool given England’s semi-final against Holland is just days after the June 1 showpiece in Madrid.

Harry Kane, Jordan Henderson and Dele Alli are among 10 players that could be involved in that final, providing Southgate with a selection headache.

“It is a little bit more complicated but firstly it is a brilliant achievement by the two clubs and by the two managers,” he said.

“In different ways, they have had phenomenal seasons against really difficult challenges.

“For our young English players it is great that they are playing in matches that really matter while under pressure and they are being really successful because that will help England in the long run.

“Although it makes our preparation a bit more complicated, that is a challenge that we have to deal with as a group of staff. We have got to adapt.

“We are always telling our players to adapt so we have got to do the same. We can still prepare the team for the game with Holland.”