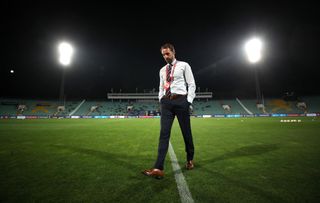 England’s Euro 2020 qualifier against Bulgaria was marred by racist abuse on Monday night.

The build-up to the game had been dominated by fears that there could be incidents of racism and England staff had to alert match officials to it during the first half in Sofia.

The Croatian referee Ivan Bebek spoke to England captain Harry Kane and a stadium announcement, calling for the racist chanting to stop, was made over the public address system in the 28th minute.

The match was halted for a second time in the 43rd minute before resuming and reaching half-time, at which point the visitors led 4-0 thanks to goals from Marcus Rashford, Ross Barkley (two) and Raheem Sterling.

HT: Bulgaria 0 England 4 – Boos at the half-time whistle. Have to wonder if the teams will return— Simon Peach (@SimonPeach) October 14, 2019

England manager Gareth Southgate spoke to the fourth official with around five minutes of the regular 45 to go, while defender Tyrone Mings was seen asking an assistant referee, ‘Did you hear that?’ during the first half and Nazi salutes were seen among a section of the home fans.

Bulgaria captain Ivelin Popov was in a heated debate with a section of home supporters near the tunnel as the rest of the players headed for the dressing rooms at half-time.

The stadium announcer said when the first chanting was reported: “This is an important stadium announcement, because of racist behaviour which is interfering with the game, the referee has indicated that he may have to suspend the match.

“Racism in football stadiums will not be tolerated. Please be in no doubt that the game will be suspended and may be abandoned if racist behaviour continues amongst spectators. Help everyone enjoy the game and say no to racism. Thank you.”

The Levski Stadium was subject to a partial closure for this match after Bulgaria were sanctioned for racist chanting during qualifiers against Kosovo and the Czech Republic.