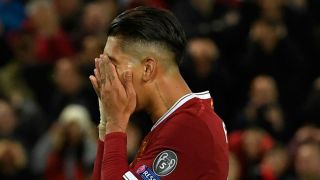 There is a freedom to the way Liverpool play that will make or break them.

After five minutes of Wednesday's Champions League showdown with Sevilla, it looked like it might very well be the latter.

Wissam Ben Yedder's opener at Anfield certainly owed more to a temporary defensive lapse than any underlying tactical failing, but it was no anomaly.

The frailties that exist in Jurgen Klopp's team when they do not have the ball are persistent and will be magnified in Europe's premier club competition.

That the Reds will face no side more taxing than Sevilla in a group also containing Spartak Moscow and Maribor should see to their progression to the last 16.

The LaLiga side – who beat the Merseysiders in the 2016 Europa League final – are no pushovers and they too will fancy their chances of progressing, but more accomplished opponents will not succumb so readily if gifted a fifth-minute lead, as Sevilla were.

What Liverpool produced in the first half in response to that self-inflicted setback was a performance illustrative of the wonderful flip side to their defensive fallibility.

Even with the creative brilliance of wantaway forward Philippe Coutinho resting on the bench until the final 15 minutes, the vibrancy and dynamism of an attacking unit comprising Sadio Mane, Roberto Firmino and Mohamed Salah is apt to unsettle any challengers.

In the immediate aftermath of Firmino's leveller, which arrived following precise build-up play from Alberto Moreno and Jordan Henderson, the Reds were rampaging forward again.

Had it been Firmino, Mane or Salah and not Emre Can on the end of a rapid counter, it would have been 2-1, but the German's finish was less assured than you would expect from one of their attacking triumvirate.

The fortune involved in the goal that put hosts ahead was evident, but not undeserved. Salah fouled Steven N'Zonzi to win the ball 20 yards out and the shot that followed took a sizeable deflection en route to beating Sergio Rico.

Though otherwise impressive, Firmino did not cover himself in glory when Mane was felled in the box, the Brazilian's spot-kick striking the upright to deny Liverpool a two-goal half-time cushion. And that proved costly.

Liverpool's heady mixture of attacking verve, profligacy and occasional rearguard alarm bells makes them a thrill to watch for any neutral, but it is hard to envisage the likes of Real Madrid failing to punish them more severely than their fellow Spanish side did here in escaping with a point.

If Coutinho should return in much the same form as he last demonstrated in club colours – and he had little chance to make an impact here – the threat Klopp's charges carry on the front foot will increase further and make them a match for anybody.

But the issues they have in preventing goals at the other end – a weakness exploited by Joaquin Correa to ensure the spoils were shared – could prove a fatal limitation to Liverpool's European aspirations this season.