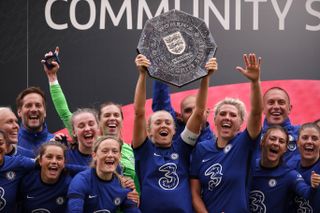 Kelly Simmons, the Football Association’s director of the women’s game, admits she is “desperate” to see fans return ahead of the launch of the upcoming Women’s Super League season.

The WSL season kicks off on Saturday with newly-promoted Aston Villa taking on Manchester City, with the game also free-to-view live on BT Sport.

“(I’m) delighted to be launching the season this weekend, it’s great to be back at last,” Simmons said.

Chelsea were awarded the title from the 2019-20 season, which was brought to a premature halt in May amid the Covid-19 Pandemic, on a points-per-game basis.

Emma Hayes’ side also won the Community Shield against Manchester City in a behind-closed-doors contest at Wembley.

West Ham Women’s Super League clash with Arsenal on September 12 will be the first competitive football match staged in front of fans since March, with a maximum of 1,000 fans allowed into Dagenham and Redbridge’s Victoria Road.

It is a start and Simmons is keen for the league to build on it.

“We’re obviously desperate to see the return of fans, they’re such a key part of the game and we’re working to get fans back as quickly as possible, ” she said.

“Next step for that for us will be the West Ham v Arsenal game in week two where we’re allowed 1,000 fans in, which will be a key step forward in terms of our work with the government to give confidence that we’re able to get football back as quickly as possible and hopefully we can do with that.

“The government, October is their timeline (for the return of spectators) and hopefully we can do all we can to make sure that we meet that together and have as many fans back in as quickly as possible.”

A number of matches are set to be shown on television this year, in addition to the FA Player, including three matches on the league’s launch weekend, Manchester United v Chelsea will be shown on BT Sport while Arsenal’s clash with Reading will be available on BBC Online and the red button.

Simmons outlined the possibilities offered by broadcast schedules, adding: “We’ve got the launch game when there’s no men’s football – but then obviously the Premier League starts – and just getting the Community Shield in as well it just feels like there’s a couple of weeks where the profile is on the women’s game.”

All clubs will be taking a knee for Black Lives Matter and a minute’s applause is set to precede each match on the opening weekend, something Simmons said was put forward by the clubs.

“The clubs agreed they wanted to do a minute’s applause in the opening game to recognise the tremendous work of the NHS and those on the front line and as a symbol in terms of all those we have lost through Covid or have been affected by Covid.

“So there will be a minute’s applause on the opening game from all of the clubs involved in the opening weekend in the Super League and in the Championship.

In terms of regulations, there will be a smaller pool of referees this year and the Super League has kept it’s salary caps at 40 per cent of turnover. However, the league will bring in home-grown quotas in line with the men’s game from the 2021-22 season, meaning eight members of the squad will have to be home grown.