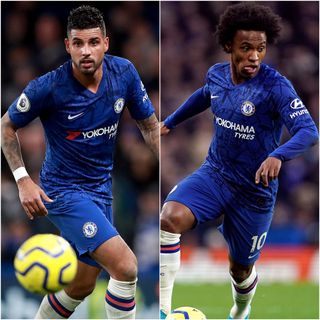 Despite being on the sidelines at Chelsea, Emerson Palmieri is reportedly attracting a lot of interest outside of England. According to The Sun, the 25-year-old left-back is a high-priority target for Serie A giants Juventus and Inter Milan. Palmieri, who was signed by Chelsea from Roma in 2018, has struggled for playing time this season after losing his starting spot to captain Cesar Azpilicueta.

Another player who could have limited time left with the Blues is Brazilian winger Willian. While the Daily Mail says the 31-year-old would prefer to stay with the west London club long term, the imminent arrival of 26-year-old Hakim Ziyech and the fact that he only has six months left on his contract suggest that Willian’s future at Chelsea is cloudy at best.

German newspaper Bild is reporting that Arsenal are on the verge of triggering the £33.25million release clause to sign defender Jonathan Tah from Bayer Leverkusen. Manager Mikel Arteta would need to be quick to pull the trigger on the deal, as Tah’s release clause is believed to expire in June.

Matheus Pereira could be confirmed as a permanent figure for West Brom as early as next month. The Express & Star says the club is set to reward the 23-year-old for his stellar form this season by buying out his loan contract from Sporting Lisbon.

It seems that an impressive trial performance was not enough for Manchester United to commit to a deal for West Ham United youngster Kai Corbett. Corbett has scored almost 150 goals in three seasons in the Hammers’ youth set-up and scored a goal for the Red Devils’ Under-18s in a win over Blackburn Rovers in a trial earlier this month. However according to the Bristol Post, United simply deemed a move for the 17-year-old forward too expensive.

Eduardo Camavinga: Real Madrid are keeping a close eye on the 17-year-old Rennes midfielder, according to Spanish newspaper Marca.

Marash Kumbulla: Inter Milan are prepared to offer a number of players to Verona as part of a deal for the Albania defender, says Italian paper Corriere dello Sport.