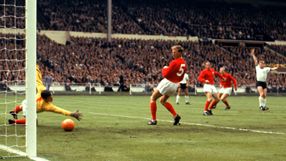 He had been suffering from dementia for some years.

The blond-haired striker - a highly skilled player despite his stocky build - was also known for having kept the 1966 World Cup final ball, taking it with him to Germany before returning it to the English FA in 1996.

He was also among the first generation of German players to move abroad, playing for 11 years in Italy and winning three league titles with Bologna and Juventus.

"Helmut Haller was one of the biggest football heroes of the post-war generation and he marked a whole generation of players as well as football in Augsburg.," said club boss Peter Bircks.

He returned to his home club of Augsburg in 1973 and retired six years later.