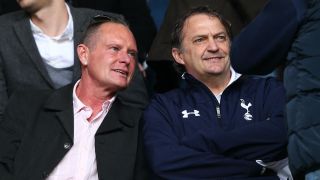 The 55-year-old was admitted for treatment on Monday after complaining of chest pains and difficulty breathing.

Spurs tweeted on Tuesday: "After undergoing successful heart surgery yesterday, we can confirm Gary Mabbutt is now in a stable condition and recovering in hospital."

The former England international spent 16 years at White Hart Lane, winning the UEFA Cup in 1984 and captaining the side to an FA Cup triumph in 1991.

Ex-Spurs striker Gary Lineker tweeted after hearing the news: "See Gary Mabbutt is to undergo heart surgery. When they operate it will be the biggest heart they've ever seen. Thinking of you, skipper."

Mabbutt, who was diagnosed with type 1 diabetes as a teenager, had an operation in 2013 to replace an artery in his leg and prevent the need for amputation.

"I can no longer do any sport or go running, and my life is now a lot more sedentary," he told BBC Radio 5 live two years later.

"It is frustrating that I cannot kick a ball ever again, but I still have my leg, which is the most important thing."

After undergoing successful heart surgery yesterday, we can confirm Gary Mabbutt is now in a stable condition and recovering in hospital. June 6, 2017