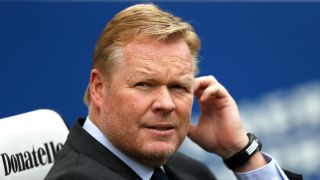 Ronald Koeman would be a fantastic choice as the next coach of Netherlands, according to Southampton goalkeeper Fraser Forster.

Koeman is out of work having been sacked by Everton last month following a dismal start to the Premier League season, his exit sealed when a 5-2 defeat to Arsenal left them in the relegation zone.

He has been heavily linked with the national team position in his home country, with Netherlands set to be looking for a new coach when Dick Advocaat departs after Tuesday's friendly in Romania, the Oranje having missed out on a World Cup place.

Forster, who played under Koeman during his tenure at St Mary's Stadium, believes the 54-year-old would be a success.

"He will suit whatever job comes his way. If that's what he wants to go for he will be fantastic at it," Forster said of the Netherlands link.

"He is a great manager. I am sure he will adapt whether it is club football or international.

"Ron is a fantastic manager and a great person. He was fantastic with me.

"He is a fantastic coach and I have no doubt he will end up in a top job somewhere else."