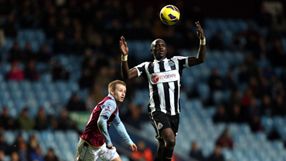 Newcastle, plagued by injuries and languishing in 15th place having finished a surprise fifth last season, have signed five French players in the January transfer window.

Assured debuts by midfielder Moussa Sissoko (pictured) and forward Yoan Gouffran, among 11 Frenchmen in the Newcastle squad, silenced the doubters.

"Welcome to the English league for the French boys. Every one of them put in a great shift," defender Steven Taylor, who was making his first appearance since November after an injury layoff, told the club's website.

"It was a massive, massive win. That feels like one of the most important games I've ever played in a black and white jersey," added the 27-year-old after Newcastle pulled four points clear of the drop zone.

Taylor laughed off suggestions that there was a culture and language clash at Newcastle amid reports of club fines for players not speaking in English.

"They [the French players] got up one by one and sang in front of the lads. It's great and it's what we need at this football club - that togetherness," said Taylor who grew up in Newcastle.

"The banter was flying the night before the game and the French lads were in amongst it. Already they've been accepted by the boys. They want to come here and fight it out and that second-half performance was what we need."

Gouffran was impressed by the famous Newcastle away support, numbering more than 2,500 at Villa Park.

"They were magnificent, absolutely superb. You just don't get that sort of support in France," said the ex-Girondins Bordeaux forward.

Manager Alan Pardew, under pressure having been given an eight-year contract by owner Mike Ashley in September on the back of his success last year, said France midfielder Sissoko had been a great find.

"Sissoko is a class act, trust me. Everything that I thought he might do for this team, he delivered in the first half," said Pardew after Sissoko provided the assist for Papiss Cisse to score the opener after 19 minutes.

"He ran out of steam in the second half - those French players now know the difference between Ligue 1 and the Premier League."

Newcastle next face Chelsea in the league on Saturday and play Ukraine's Metalist Kharkiv in the Europa League last 32 in February.