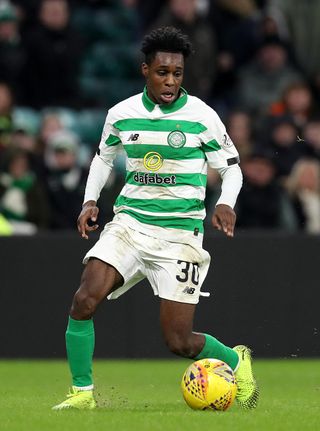 Celtic youngster Jeremie Frimpong admits he is itching to get his first taste of European action when the Hoops resume their Europa League campaign next month.

The 19-year-old surprise package was initially assigned to the Hoops reserve team when he arrived from Manchester City last summer.

The Dutchman was so far down Neil Lennon’s pecking order, he was not even included in their European squad.

But the £300,000 signing has since forced his way into Lennon’s team on the back of some impressive displays and will be one of the first names on the team-sheet when the Ladbrokes Premiership leaders return to continental again Copenhagen in the last 32.

And Frimpong cannot wait to sample his first European night at Celtic Park.

He told the Celtic View: “I’ve been wanting to play in European competition for the longest time.

“If I get the chance to play in the last 32 tie, that’ll be a dream come true for me.

“To play for Celtic in Europe? It’s quality. Even the thought of it gets me excited.

“When Chris Jullien scored the header right near the end against Lazio (in the group stages), the fans went totally nuts – and I was going mental with them.

“I watched the Lazio game in Rome in my house, I put it up on my Instagram, I was over the moon. What a goal to win it with as well! Olivier Ntcham was clinical.”