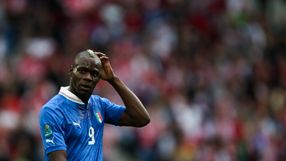 Media reports said Balotelli's agent Mino Raiola had reacted with fury at the depiction, which comes after the 21-year-old has battled racism in his homeland and abroad for years.

The cartoon of the Manchester City forward on top of London's Big Ben swatting away footballs was meant to be humourous and positive, showing the striker as a giant who had conquered England.

However, in the wake of Italy's Euro 2012 quarter-final win over England and ahead of their semi-final with Germany on Thursday, the cartoon has received complaints from readers.

"We can honestly say it is not one of the best efforts by our great cartoonist," Gazzetta said.

"If someone found it offensive we are sorry.

"This newspaper has always fought against racism in stadiums and denounced monkey noises aimed at Balotelli."

Neither Balotteli nor Italy were immediately available to comment.

The cartoon was printed on Sunday and at first went largely unnoticed but has now become a hot topic across the internet.

Balotelli, born in Italy and of Ghanaian descent, was racially abused by Juventus fans during his time with Inter Milan and the Turin club was forced by Serie A to play a match behind closed doors.

However, racism campaigners in Italy have long believed not enough was done to protect him in a country not as used to immigration as other major European nations like the Britain and France.

At Euro 2012 Balotelli was subjected to racist abuse by Croatia fans during a match on June 14 and the Croatian FA was fined 80,000 euros by European governing body UEFA.

The size of the fine was criticised by the Football Against Racism in Europe (FARE) network, who told Reuters there was public concern that Denmark's Nicklas Bendtner was fined 20,000 euros more for exposing an illegal advert on his underpants.

Spain have also been charged over the racist behaviour of fans.

Before the tournament Balotelli said he would "kill" anyone who threw a banana at him in the street and indicated he would walk off the pitch if he heard racist chanting.

Balotelli and the Italy camp did not hear the abuse in the Croatia or Spain match.