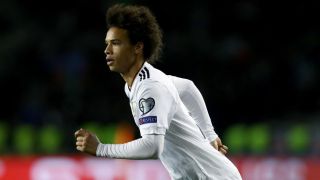 The 21-year-old is to undergo surgery on his nose and will therefore sit out the tournament in Russia, which begins on June 17.

"I would have liked to have been in Russia," Sane said via a statement on the German Football Federation's website.

"I decided, in consultation with the doctors, to use the summer break for this procedure so I can start the new season with a clean bill of health."

Germany have not yet named a replacement for Sane but do not have to submit their final squad for the tournament until June 7.

The world champions face Cameroon, Chile and Australia in their group.

Sane registered nine goals and eight assists in all competitions in his first season with City.