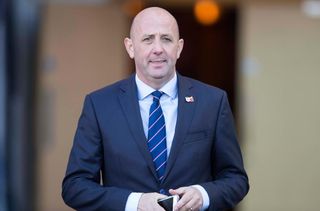 Rangers assistant manager Gary McAllister will miss Sunday’s Celtic Park derby following an incident in Leeds last weekend when he was punched in the face.

The former Leeds midfielder needed hospital treatment after the assault that took place at 4am on Sunday morning.

West Yorkshire Police announced earlier on Friday that a 32-year-old man had been arrested before being released under investigation. They are continuing their enquiries.

Rangers manager Steven Gerrard said: “It’s a shame he is not going to be with us at the weekend. I took the decision out of Gary’s hands.

“He is recovering well but I think it’s better he rests, recovers and gets himself 100 per cent right, and we get Gary McAllister back when he can be the real Gary McAllister.

Gerrard’s opposite number, Neil Lennon, has also been the victim of an assault in the street, as well as other attacks, and will miss McAllister’s presence.

“My thoughts are with Gary, straight away,” Lennon said. “It is horrific and I am sorry that he is not going to be in the dugout.

“He is a great football guy, I have known him a long time, playing against him or away from football.

“He certainly doesn’t deserve that and I hope they get the culprit and he gets what’s coming to him and justice is served. It is abhorrent, I can’t put it any other way really.

“He is there with his wife as well, so from all of us here, get well soon Gary and hope to see you soon.”