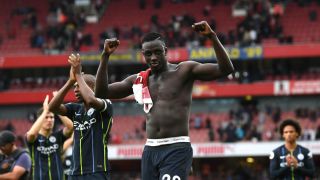 Manchester City boss Pep Guardiola has confirmed he spoke with Benjamin Mendy after the injured France defender turned up late for treatment on Sunday.

The left-back is currently sidelined with a bruised metatarsal and was scheduled to see club medics for rehabilitation work but, having taken in the Anthony Joshua versus Alexander Povetkin fight on the Saturday night in London, failed to report on time.

It is not the first time the former Marseille man has been rebuked during his time in England, with Guardiola requesting Mendy toned down his social media output in August.

Having initially tried to pass off Mendy's tardiness as being due to traffic problems - "Manchester is under construction" - and claiming "most of the players have been late, they take their kids to school", Guardiola admitted: "They [the players] should be here, he knows it. I have spoken with him."

The issue is a rare bump in the road for City, who have rebounded well from their shock Champions League defeat to Lyon with resounding away wins at Cardiff City and, in the EFL Cup, Oxford United.

Phil Foden, City's 18-year-old midfielder, stole the show at Oxford with a wonderful display and his first goal for the club, but Guardiola said he was in the dark over reports City were planning on offering him a new contract.

"I don’t know, I haven’t spoken to [director of football] Txiki [Begiristain]. I think Phil would like to stay here and the club has no doubts about that. Hopefully it will happen sooner rather than later.

PEP: I don’t know. I didn’t speak to Txiki about (new Foden contract).Phil likes to be here and the club has no doubt about that, the manager has no doubts.Hopefully it’ll happen soon but I have no involvement in that.September 28, 2018

"He's ready to play in any game, he's ready. But he has to compete with his team-mates and sometimes it's not possible."

Foden may struggle for game time against Brighton and Hove Albion on Saturday after Guardiola confirmed his squad had no new injury problems, while Belgium star Kevin De Bruyne is also expected to return to an element of team training "in the next few days".

Former Barcelona and Bayern Munich boss Guardiola is expecting a difficult afternoon against a Brighton side he admires and warned his players they must focus ahead of a week that features games against Hoffenheim and Liverpool.

"Of course, if they want to play against Hoffenheim and Liverpool they have to play every single day as well as possible," he said.

"I know what Brighton have done against Manchester United [a 3-2 win] and, at Anfield [against Liverpool], they were so close to getting the points.

"They are a good side with a good manager. They have been together a long time and know what they have to do.

"They are really well organised in the back four, it will be a tough game."