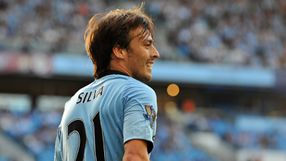 Champions Manchester City have been dealt a blow for the tricky trip to West Bromwich Albion on Saturday after midfielder David Silva returned from international duty injured.

The Spaniard damaged his hamstring against France on Tuesday. "David has a hamstring problem and is not ready for tomorrow," coach Roberto Mancini said. "We hope that he will be ready for the next Premier League game against Swansea."

Sixth-placed West Brom hope Romelu Lukaku will be fit to face City despite hurting his ankle while on international duty with Belgium this week. However Youssouf Mulumbu is a doubt after picking up an injury while playing for DR Congo in an Africa Cup of Nations qualifier.

Liverpool manager Brendan Rodgers could also be counting the cost of the international break with Spanish goalkeeper Pepe Reina nursing a hamstring problem ahead of the home match against Rodgers' former club Reading on Saturday.

"Speaking to Pepe last night, he very rarely has any muscle injuries, but hopefully it will prove not to be serious," Rodgers told Liverpool's website.

"I think Spain picked up a few injuries. By all accounts the pitch wasn't the best and a number of them picked up muscle injuries."

Fourth-placed Everton will be without influential midfielder Marouane Fellaini at Queens Park Rangers on Sunday because the Belgian has a knee problem, although he should be fit for the Merseyside derby the following week.

Ashley Young is fit to return for Manchester United against Stoke City on Saturday after recovering from the knee injury he sustained against Fulham in August.

"Young gives us another option," Ferguson told United's website. "Very few players can cross the ball as well as he can and his goal-scoring ratio is very good for us."

United are still stretched at the back, however, with Chris Smalling not quite ready to return. They are also without Nemanja Vidic and Phil Jones.

Ferguson said all the United players will wear anti-racism T-shirts before the game against Stoke as part of the Kick it Out campaign's awareness drive.

Several black players, including Reading's Jason Roberts, have said they will not wear the shirts in protest at what they think is a failure to tackle an issue thrown into the spotlight by the John Terry saga.

"I think everyone should be united, I don't know what point he's trying to make," Ferguson said. "He really should be supporting all the other players who are doing it."

Stoke midfielder Glenn Whelan only has a 50/50 chance of recovering in time from a hamstring injury, according to manager Tony Pulis. Former United striker Michael Owen could be on the bench af