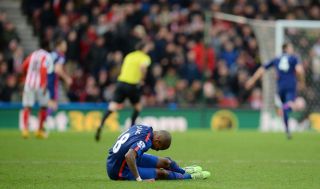 Young was withdrawn in the second half of a game that ended 1-1 after pulling up unchallenged.

Manager Louis van Gaal confirmed afterwards that the issue could sideline the winger for a significant period.

A tweet from the club's official feed read: "Louis van Gaal tells #MUTV Ashley Young suffered a hamstring injury and fears he could be out for "many weeks"."

United have racked up more than 50 separate injuries over the first half of the campaign.

They are currently without British-record signing Angel di Maria, Marcos Rojo and Daley Blind among others.