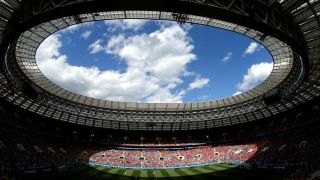 Harassment of women has been the main incident reported by FARE to FIFA during the 2018 World Cup, according to the organisation's executive director Piara Powar.

Thirty instances of women being accosted, either local Russian fans or female journalists, have been referred to world football's governing body by the FARE group, which combats discrimination in European football.

Powar says there could be as many as 10 times that number when it comes to locals being targeted, because that type of incident is unlikely to get the same coverage as some of the scenes witnessed on camera during the tournament, which include women broadcasters being kissed and grabbed by passing men.

However, Powar added that the more widely anticipated scenes of discrimination, such as racism and homophobia, have been less apparent than initially feared in a "largely positive" World Cup.

is a beacon for celebration, education and human rights in and during the Visit us: July 9, 2018

"The World Cup is a special environment. If you come with prejudices, you're in the wrong place. We've seen that good feeling come through," Powar told a news conference at Luzhniki Stadium.

"Most people feel it's been an interesting tournament. There haven't been a great deal of incidents of the type we expected. The only thing we've really flagged up that's been significant has been the level of sexism encountered by women, often

Russian women confronted by fans, and 30-plus female reporters who have been accosted. We've identified about 30 cases where fans have been specifically involved. Perhaps the real figure is that times 10.

"We've been in touch with ex-players, agents, particularly those of ethnic minority backgrounds, and nobody has expressed any concerns."

Only 10 formal reports of incidents of discrimination inside the host stadiums have been made to FIFA by FARE. Alexey Smertin, the former Chelsea midfielder who has led the Russian Football Union's anti-discrimination fight, said several individuals have had fan IDs confiscated and some have even lost jobs at home due to embarrassment over their alleged actions.

The success of the fan ID system in warding off potential troublemakers has led Smertin to champion its use in Russia's domestic league, although he accepts there are "a number of technicalities" to overcome before they can be rolled out.

There have been incidents on the pitch, including Xherdan Shaqiri and Granit Xhaka's apparently pro-Albania celebrations against Serbia that led to fines for the Swiss Football Association, which have threatened to inflame tensions between nations and fan groups.

With strict rules dictating the public display of flags in Russia, six activists from Latin America found a creative way to make a statement by using their football shirts at the . July 9, 2018

The LGBT+ community is also thought to have suffered discrimination in some host cities, with some reports claiming certain LGBT+ groups have had hotel bookings cancelled without explanation.

FIFA's Head of Sustainability and Diversity, Federico Addiechi, hopes the support of diversity houses in Moscow and St Petersburg will help to combat prejudice in future, but admitted there is a limit to how much of an impact the World Cup will have on LGBT+ rights in Russia after the tournament ends.

"I believe things are not changing enough around the world," he said. "We need to do more, and this is our commitment at FIFA, to do as much as we can through the power of football. We're talking about changes that will take a long time.

"Our position is to show presence where we can. We very much rely on our member, the Russian Football Union. We have a limited possibility when it comes to the impact we can have when we leave the country."