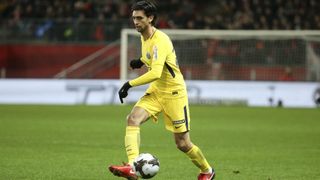 Inter supporters' hopes of seeing Paris Saint-Germain star Javier Pastore join the club have been emphatically extinguished by coach Luciano Spalletti, who claims the Argentinian "earns more than all of our players put together".

Pastore had been strongly linked with a move to Inter at the end of January, with the Italian club believed to be keen on him replacing Marcelo Brozovic, who was reportedly close to joining Sevilla.

Speculation suggested Inter were keen on a loan deal that included a purchase option at the end of the season, but PSG are said to have preferred an immediate sale, something the Nerazzurri board were unwilling to sanction.

Spalletti does not think the matter progressed as far as the media suggested, however, highlighting the fact Pastore earns too much money to be considered a realistic target for Inter.

"I haven't ever spoken about him [Pastore]," Spalletti told reporters at his pre-match news conference ahead of Saturday's clash at home to Crotone.

"It appeared nearly impossible because of the differences in salaries between us and PSG.

"If you're wanting to sign a player like him, who earns more than all of our players put together, first you need to look at the numbers. However, Rafinha has roughly the same characteristics as him," he added, referring to the loan signing from Bayern Munich.

Spalletti claimed he believes clubs do not have to spend a significant amount of money to be successful, urging Inter to stay "true to our sporting values".

"One can reach their goals through many different ways, not only by spending more money than those who have it," he said.

"Tomorrow [Saturday, against Crotone] we must work in a serious and proper manner, staying true to our sporting values and not letting them mislead us.

| Summarised in just seconds, here are all the best bits from today's press conference for ! February 2, 2018

"At the end of the year, there will be more resources, knowledge and data. Nothing is owed to us, but it is essential not to create false expectations.

"False expectations can lead to great disappointment and can create unease among fans and those at the club. We must be focused on our own colours and our own squad.

"From all the talk and the names that have been bandied around, the players wrongly thought that they must be replaced. Since the start of the year, I've always said the same things to them."