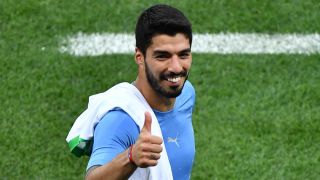 Luis Suarez is one of the world's best forwards and his goal against Saudi Arabia will help him, according to Uruguay team-mate Cristhian Stuani.

Suarez marked his 100th appearance for his nation with the game's only goal in a 1-0 World Cup win Wednesday.

Stuani praised Uruguay's all-time leading goalscorer – who has netted 52 times for his nation – as his country look to claim top spot in Group A with a win over Russia Monday.

"For us it's really important to have Luis in our team because he is a world-class player, and he is one of the most important strikers in the world, and he is here, with us," he said.

"Reaching the 100 international matches in such a form is very important and hard as well, and it cost him a lot of effort and sacrifice for sure.

"We are very happy with him, he was able to find the goal in the last game against [Saudi] Arabia, and that goal will help him and help the group too.

"We are lucky to have many world-class players who strengthen the team and share a lot with us, and hopefully [Suarez] will keep giving the best from him so his statistics could keep growing."

Uruguay have recorded back-to-back 1-0 wins to start the World Cup, assuring them of a spot in the last 16.