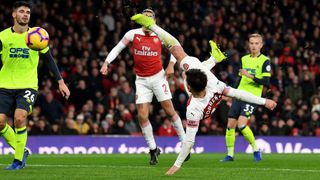 Granit Xhaka joked Arsenal's Lucas Torreira wants to be like Pierre-Emerick Aubameyang and Alexandre Lacazette after the Uruguay international's overhead kick gave the Gunners a 1-0 victory over Huddersfield Town.

Torreira dispatched an acrobatic effort in the 83rd minute to move the Gunners into the Premier League's top four and extend their unbeaten run to 21 games in all competitions.

Though Arsenal started with the Premier League's joint-top scorer Aubameyang and Lacazette together in attack, it was Torreira, who only scored his first Arsenal goal earlier this month, who proved to be their match-winner.

"I think he wants to be like Aubameyang or Lacazette!" Xhaka told BBC Sport.

"It was an important goal for the whole team because it was not easy."

Hector was all of us when that winner went in December 8, 2018

Three days later Unai Emery's men claimed a 2-2 draw at Manchester United, with Xhaka pleased that they were able to pick up seven points from a possible nine in the space of seven days.

"It was a perfect week for us, I think," he added.

"Tottenham at home, Manchester United away, today. I think it is perfect for us.

"We still have a lot of things to improve, of course, but we can be happy. It is not normal to go 21 matches unbeaten.

"We have to believe from the first minute to the end and again we showed a good character."