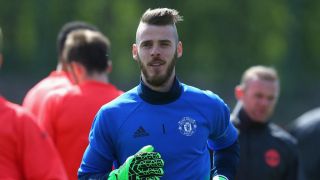 The former Atletico Madrid goalkeeper was close to moving to the Santiago Bernabeu in 2015, but the deal collapsed late in the transfer window.

He has overcome the disappointment of failing to secure a return to the Spanish capital and continues to produce outstanding performances between the posts at Old Trafford.

Asked during an interview with Marca if he thinks his fellow Spaniard will eventually join Madrid, Herrera replied: "Hopefully not. He is the best goalkeeper in the Premier League for me and for many people.

"He's been at the club for six years. He is very close to [former United goalkeeper Edwin] van der Sar in games played, and can become a legend. People here love him very much.

"There are few goalkeepers in the world who win you points and David is one of them."