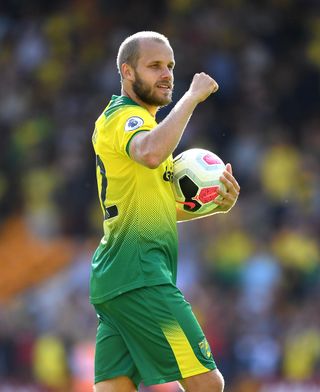 Crystal Palace manager Roy Hodgson is pleased Teemu Pukki has showed his potential, having watched the Finland international when he was starting his career at KTP.

Hodgson was in charge of the Finland national team between January 2006 and November 2007 before he left to take over at Fulham.

Just over a year later, in February 2009, Pukki made his international debut, but the highly-rated teenager struggled while in Spain – after signing for Sevilla from Veikkausliiga side KTP – and only started to get his career back on track after a spell at HJK Helsinki in his home country.

Failed stints at Schalke and Celtic appeared to end his chances of being a success in Europe’s major leagues, but Norwich signed the striker on a free transfer two summers ago and the reward has been startling, with the 29-year-old currently boasting six goals in six Premier League games this season.

Ahead of facing the Canaries forward on Saturday, Hodgson reflected on the promise Pukki always had.

“I remember him coming through. He would have only been about 16 or 17, but I went to Fulham,” the former England manager said.

“I knew he was a major Finnish talent and one they believed in, but then I lost track of his career and when he turned up again at Norwich I remembered his name and that he had been a promising player.

“He has obviously worked very hard at his game to become the player he is today after one or two setbacks, so that speaks volumes about his character and the type of person he is.”

Palace are unbeaten in their last five league games at Selhurst Park, but if they are to register a win against newly-promoted Norwich, they will have to find a way of keeping last season’s 30-goal striker Pukki quiet.

“You make certain that you try to deny him the passes that he will need to score and our players who will be in the area in which he plays are aware of how he plays, what type of runs he makes and what he’s looking to do.”

While many Premier League sides would probably relish the prospect of facing a team promoted from the Championship last season, Hodgson is well aware of the threat Daniel Farke’s men possess.

He admitted to watching the Canaries opener at Liverpool – a 4-1 defeat – and thinking “they are a very good team.”

“I think they are very good and they play some extremely good football,” Hodgson said. “I’m pretty certain the win against Manchester City tells you everything you need to know about them.

“I would rather we played against another team than Norwich, a team I feared a bit less, but this is the fixture that is in front of me.”

Palace could be without Mamadou Sakho after the former Liverpool defender felt a “slight strain”, according to Hodgson, and he also confirmed Connor Wickham would not be part of the squad on Saturday despite returning to first-team training this week.

Wickham is expected to appear for the Under-23s next month to improve his match fitness and he will then hope to boost a team who have scored only four goals in the Premier League this season.