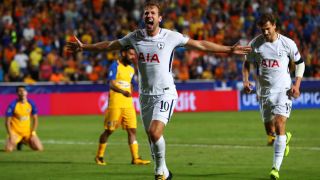 Harry Kane's form has been described as "hot" by England team-mate Joe Hart, who believes the Tottenham striker can become the world's best.

Spurs star Kane scored 13 goals for club and country in September, a return that matched the most prolific calendar months enjoyed by Lionel Messi and Cristiano Ronaldo in their illustrious careers.

And Hart believes the 24-year-old deserves to be considered in the top bracket of global stars.

"He is hot, isn't he? He is scoring just as many goals as the people we have related to as world class, and he has been doing it for many seasons.

"Harry gets put in that bracket and deserves to be. I see it in Harry. I see how he behaves.

"Mauricio Pochettino, one of the hottest managers in the world, regards him highly and there are reasons for that.

"Harry will keep being Harry, and he will keep scoring goals. As long as he is in my team, wearing an England badge, I want that to continue.

"You just know he is a good player. You know you will get a hard shot with Harry. If you give him half an inch he will get a strike on goal and make you work.

"There is no real secret to him and that is the brilliance of Harry. It is not dazzling skills, Harry is just brilliant at what he does and he is just one of the best out there.

"He keeps scoring goals and you cannot ask for any more than that. Long may it continue in an England shirt."

An honour to meet a real legend and be there for the opening of a pitch in his name. October 2, 2017

Kane's amazing September came after he continued a bizarre streak of failing to score a Premier League goal in August.

West Ham goalkeeper Hart added: "The season is crazy. He knows what will happen. We can only live in the moment.

"I remember some of the rubbish coming his way when he did not score in August but I still regarded Harry as the one you saw at the end of September with the same frightening number of goals.

"Whether he keeps his form, scores 40 goals or ends up with 20, he is still a top player and we are lucky to have him."