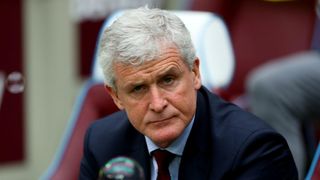 Mark Hughes has described the Swansea Marriott as one of the "poorest hotels we stay in" after Southampton's preparations for Tuesday's crunch clash against Swansea City were disrupted.

The Saints were meant to the staying at the Marriott, but were forced to change hotels at short notice and had to spend the night before the game in Cardiff – almost 40 miles away.

Southampton were reportedly told that they could not stay at the hotel due to a virus but, as of Monday night, rooms were still listed as available for bookings to the public.

Speaking to Sky Sports ahead of the game, Hughes said: "Actually, they've done us a favour. The Swansea Marriott is one of the poorest hotels we stay in."

When asked if he thought there was anything suspicious about the circumstances around the late switch, Hughes added: "You have to take them at their word."