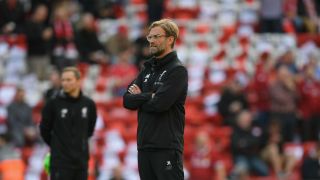 Jurgen Klopp feels he would be an unpopular man if he adopted Jose Mourinho's tactics at Liverpool after Premier League leaders Manchester United bedded in for a 0-0 draw at Anfield.

United edged back ahead of Manchester City at the summit – their neighbours face Stoke City later on Saturday – but offered little as an attacking force on Merseyside, with the exception of Romelu Lukaku shooting too close to Liverpool goalkeeper Simon Mignolet in the 43rd minute.

Mignolet's counterpart David de Gea produced the game's outstanding moment when he denied Joel Matip with a tremendous reaction save, while Klopp felt Philippe Coutinho should have been awarded a penalty when he took a tumble in the United box.

Liverpool have now won only one of eight matches in all competitions, but Klopp feels their luck will change if they show more of the application that was on display against their old rivals.

"It's difficult to judge. I think again the performance was worth three points. We were the better side, the more active side," he told Sky Sports.

"United came here and wanted a point. They got it. We wanted three points and didn't get it.

"Everyone knows it is difficult when a top-class team like Manchester United has that defensive approach. It was a clear penalty off Phil.

"Let's carry on. So far, we've only lost one Premier League game. It's not exactly what we want but everybody could see we're not miles away from Manchester United.

"It's not my right to be frustrated. I'm sure if I played like this we could not do this at Liverpool.

"But it’s all okay. We have to deal with our performance and our situation."

Klopp cut a disgruntled figure after the 1-1 draw at Newcastle United before the international break but was unquestionable more upbeat on this occasion.

"There were a lot of brilliant individual performances in a very difficult game but sometimes to open it up you need a little bit of luck," he said.

"We need to keep working hard and it will happen. I hope then, for our fans, we can score a few more goals than today.

"I'm happy with a lot of things but I know we need results. We will get them if we carry on like this. It will happen."

The former Borussia Dortmund boss refused to be drawn on a clash between Dejan Lovren and Lukaku, which saw the Liverpool defender get caught in the head with a boot – an incident that seemed more clumsy than malicious.

"That's something you have to judge," he added. "You have 500 cameras in the stadium. It’s something I didn’t see."