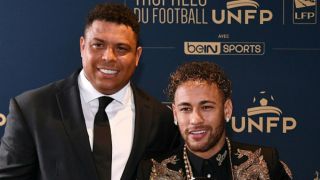 Former Brazil striker Ronaldo does not know if Neymar is happy at Paris Saint-Germain but believes he has brought a great deal to both the club and the league since his arrival.

Neymar joined PSG at the beginning of the season in a record-breaking deal from Barcelona and won a domestic treble with the club in his first season in France, scoring 28 goals in the process.

And Ronaldo, who also made the decision to leave Barcelona during his playing career, moving to Inter in 1997, believes that his compatriot has been good for the profile of the league.

"I think he brings a lot. Not only his talent, but his brand. Everybody speaks about PSG and the league all over the world. He is a very good player, and everybody talks about him."

However, the former striker questioned Neymar's mentality since moving to the French capital, amidst persistent speculation over his future and links to Real Madrid.

"Neymar has been here for a year and he was unlucky with his injury," Ronaldo added of Neymar, who has returned to training following a broken metatarsal. "I do not know if he is happy here in Paris or not, but life goes on.

"We need to wait and see what happens."