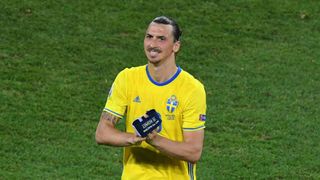 Zlatan Ibrahimovic thinks Sweden's players all deserve to be given a Golden Ball award for their efforts at the World Cup.

Sweden exited Russia 2018 on Saturday after a 2-0 loss to England, who will face Croatia for a place in the final of the tournament.

But Sweden over-achieved against expectations even without the services of Ibrahimovic, who was impressed with Janne Andersson's side.

"Every player should get a Golden Ball in Sweden," Ibrahimovic wrote on Twitter.

"What they did will be remembered forever. Thank you for the show."

Every player should get a golden ball in Sweden. What they did will be remembered forever. Thank you for the show July 7, 2018

Wayne Rooney - set to cross paths with the ex-Sweden international in MLS after joining DC United - was quick to tease his old Manchester United team-mate, though.

"If you need a chat I'm always here."

Ibrahimovic has also lost a bet with another former United player, David Beckham, meaning he will have to watch an England game at Wembley with the ex-LA Galaxy star.

Beckham had promised to buy Ibrahimovic whatever he wanted from IKEA if Sweden triumphed in Samara.

Zlatan Ibrahimovic lost the bet!It looks like he's heading to Wembley with David Beckham.Get the shirt on order.The fish and chips can probably wait, though...July 7, 2018