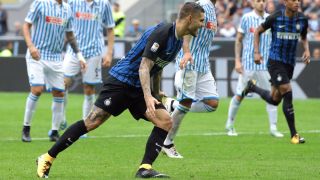 Mauro Icardi is the best forward in the world after Lionel Messi and Cristiano Ronaldo, according to Hernan Crespo.

Icardi joined Inter in 2013 and, after scoring nine goals in his opening season at San Siro, has reached tallies of 27, 16 and 26 in his last three seasons with the club.

He already has five goals in three Serie A games this term for an Inter side who have taken maximum points and Icardi is reportedly poised to be offered a new contract.

And Argentine compatriot Crespo, who the Scudetto three times with Inter, told Gazetta dello Sport: "After Cristiano Ronaldo and Messi, who are from another planet, Icardi is the striker I like the most.

"At the age of 24 he is already a champion and can become truly world class.

"I've been tracking Icardi since he first arrived in Italy. Every year, albeit surrounded by difficulties, he has always made steps forward.

"That's a sign that we are talking about an intelligent guy. Now he seems mature for the big step up.

"Let's not forget that since he's been playing in Serie A, the only time he failed to reach double figures of goals was in 2013-14. He knows where the goal is.

"Icardi is a complete centre-forward. He can score goals with his right foot, left foot, or his head. In the box he moves like he owns it: darting runs, dummies, sudden changes of pace. All of it is aimed towards creating a goal. He has incredible qualities and on top of that a powerful physique.

"Let's be clear, he did the best he could when the team around him had problems. Before he used to stand there in the penalty area waiting for the ball, and when it did arrive, he'd score.

"Now he has also learned to move and help the team. He dictates the pass outside the box, spreads to the right and left, opening up channels for his team-mates. He is becoming a real team player."

Icardi made his first Argentina start this month and Crespo added: "Icardi is the perfect striker to pair with Messi. There used to be controversy around him, but I never agreed with that. Now it looks as if everyone is in agreement: Icardi is the right centre-forward to take us to the World Cup.

"He is fundamental for Inter. If Ivan Perisic crosses from the left, Mauro is ready to score. Antonio Candreva down the right, cross and Icardi nods in. If there's a penalty, he won't miss. Tell me, what coach wouldn't want someone like that?

"Luciano Spalletti's advice is really helping him. He participates more in the team moves, talks to his team-mates and works really hard. He is now a real captain and that's not something to be ignored."