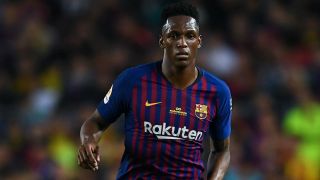 Yerry Mina revealed he was losing €50 daily to team-mates Lionel Messi and Luis Suarez after making free-kick bets with the star Barcelona duo.

Mina arrived from Palmeiras in January but the Colombia international defender has struggled to establish himself at LaLiga champions Barca amid links to Everton and Manchester United.

The transition from Brazil to Spain has not been easy for Mina but the 23-year-old lifted the lid on bets he had with Messi and Suarez to help settle in.

"When I first joined the club, I started betting with Lionel Messi and Luis Suarez to generate a good atmosphere," Mina told Bocas magazine.

"It was to see who could take the best free-kicks in training but every day I was losing 50 euros.

"And I was like, 'What, I'm paying for these guys to go shopping!' I had to laugh but the truth is those monsters put the ball where they want, they are great people as well as magicians.

"In terms of my future, I have no idea but I'm calm about it. I'm 23 years old and have a lot of football left to play."

Mina admitted he feared for his career after failing to convince following his mid-season arrival.

The Colombian – who played a key role for his country at the World Cup in Russia – made just five LaLiga appearances and seven in all competitions last season.

"I thought a lot of things, a lot of bad things. I thought I was finished," he said. "I felt so bad and [Philippe] Coutinho and Paulinho tried to encourage me all the time and told me that everything would be fine.

"For me, I understand that there are spectacular players [in his position] but I just wanted to have a minute to impress and it didn't happen.

"The few minutes I did get, they were bad... it felt at times like everything was going wrong and coming down.

"I felt like I couldn't do anything right, such as even giving a pass in training."