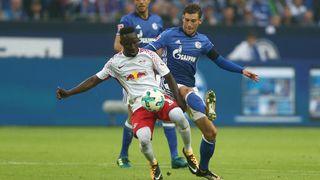 Schalke were 2-0 winners against Leipzig, runners-up last season, on the opening weekend of the new Bundesliga campaign, with Nabil Bentaleb and Yehven Konoplyanka on target at Veltins-Arena.

But Keita, a reported target for Liverpool in recent months, stood out for the visitors as Heidel acknowledged the unique challenge of tackling the 22-year-old.

"Everyone has seen that Leipzig are a top team, especially since they have a 12th player," he said. "Naby Keita plays for two, this boy is incomprehensible.

"I have rarely seen such a thing live. Even if we threw three players at him, he somehow managed to hold onto the ball."

Keita scored eight Bundesliga goals in 31 appearances in his first season with Leipzig, having signed from Red Bull Salzburg in June 2016.