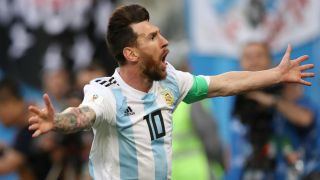 Brazil striker Neymar came under fire in the media for his theatrical responses to challenges from opponents during the Selecao's run to the quarter-finals, where they were knocked out by Belgium.

The Paris Saint-German frontman was widely regarded to have underperformed at the tournament, despite having only recovered from a metatarsal injury shortly before travelling to Russia, and Infantino came to his defence.

"Those who know me a little bit know that when I'm in front of such gifted players, who make us all dream, I cannot say any negative words about them.

"Neymar is one of these top legends. Of course, he will show us much more of his real football skills in the future."

Infantino acknowledged that Argentina failed to live up to expectations when they went out in the round of 16 following a 4-3 defeat to eventual finalists France, but praised Messi's performance at the tournament.

The Barcelona talisman scored one goal in Argentina's four World Cup games, demonstrating exquisite control before firing them into the lead against Nigeria, but failed to inspire his team-mates to glory on his fourth visit to the game's biggest stage.

Infantino said: "With regards to Argentina, of course, they expected a lot from the national team. The whole world was looking forward to seeing them and they lost a very intense match against France, who are in the final.

"You can't always win in football. Messi, he was amazing, as always, he scored an amazing goal and he could maybe have done more, or not. If they had been able to defend when 2-1 up against France, Messi maybe could have shown his skills.

"But there is nothing to say about Messi. He has been making us dream for 10 years and I'm sure he will continue to do so for many years."