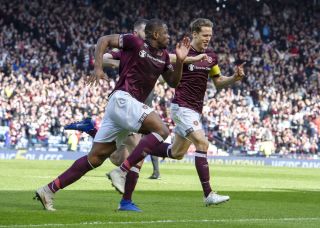 Hearts manager Craig Levein still has some concerns over the chances of Uche Ikpeazu, Peter Haring and Arnaud Djoum making the William Hill Scottish Cup final on May 25.

The three players are unlikely to feature against Hampden opponents Celtic when Hearts take on the champions in the league on Sunday, six days before the final.

Haring has not featured since the semi-final win over Inverness because of groin trouble and fellow midfielder Djoum missed out at Aberdeen last week. Striker Ikpeazu went off with a tight hamstring early in the second half of Hearts’ defeat to Kilmarnock on May 4.

When asked about Haring and Ikpeazu, Levein said: “It’s that close between making sure they are all right for the final and weighing up whether training is more important than game time.

“They are both doing a little bit today (Friday) so things should become clearer, possibly the beginning of the week, just exactly where they are.

“Obviously we have not got weeks to spare or they would probably have had some game time.”

When asked if they could still miss the final, Levein said: “Of course. There are three – Arnaud, Uche and Peter. Arnaud’s Achilles has been bothering him, that’s a little issue. I’m hopeful all three will be fit for the final.

“It will be a younger squad (on Sunday). How many of the youngsters will start, we will wait and see, but I’m inclined to give some of them some experience and game time, and at the same time have a look at a couple of things shape-wise.

“It’s a funny situation to be in, just exactly the best way to deal with it, and a number of scenarios are going through my head. But my main focus obviously has to be making sure we have all of our best players available for the final.

“We don’t need to find out this weekend if they are going to be available for the final, we have plenty of time.”

Levein has been working on his Hampden game plan for weeks and even experimenting in matches, and has few concerns about giving much away at Celtic Park on Sunday.

“The nature of our team selection and the players that aren’t going to be available, we are not going to give an awful lot away anyway,” he said.

“But it’s interesting because there are going to be opportunities to stake a claim for a place.

“It’s still a game at Celtic Park, a competitive game, so anybody that plays will benefit, and hopefully we don’t get anyone injured.”