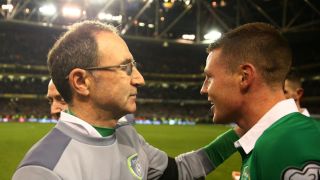 Republic of Ireland manager Martin O'Neill has fired back at Ronald Koeman in the row over James McCarthy's fitness – labelling his Everton counterpart as the "master tactician of the blame game".

Everton midfielder McCarthy will miss Saturday's Merseyside derby against Liverpool at Anfield with a hamstring injury he sustained while away with his country during the recent international break.

McCarthy was absent for Everton's previous two matches, leaving his club boss clearly displeased at his Friday news conference, where he read a prepared statement on the matter.

"We advised extreme caution. He was not fit to play," Koeman said. "In my opinion, the Ireland manager in this instance was not protecting the player.

"I am not surprised but, yes, disappointed."

Koeman also called for McCarthy to "take responsibility" but O'Neill defended himself and the player in a statement of his own on the Football Association of Ireland (FAI) website – accusing Everton of hindering the 26-year-old by inflicting a heavy pre-season workload that preceded persistent groin and hamstring problems this term.

"Once again the Everton manager, master tactician of the blame game, has struck out in his comments today, criticising both myself and James McCarthy," O'Neill said.

"Perhaps a review of Everton's pre-season programme might provide some enlightenment.

"James had a magnificent tournament for the Republic of Ireland last during Euro 2016, playing his last game in very late June.

"He then returned to Everton after a very short break, but only 11 days later, he played his first of three games, all within an eight-day period, against Real Betis, Manchester United and Espanyol. Overloading?

"It should be added that James last played for his country on the October 9, 2016 - almost half a year ago. Since that time he has been totally under Everton's supervision.

"James is diligent and conscientious in his professional preparation. Perhaps, in this instance, quiet introspection may serve the Everton manager and his medical staff better."

McCarthy has been restricted to 13 appearances in all competitions for Everton this season, starting seven Premier League games. He has 41 caps for the Republic of Ireland.