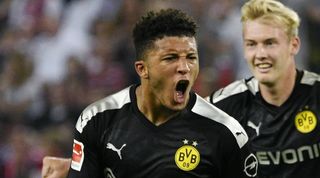 Jadon Sancho does not intend to leave Borussia Dortmund in January despite feeling “humiliated and scapegoated” by the club, according to reports.

Sancho enjoyed a sensational breakout campaign in 2018/19, scoring 12 goals and providing 14 assists as BVB finished as runners-up behind Bayern Munich in the Bundesliga.

He has already contributed to 10 goals so far this season, finding the net four times and setting up team-mates on six occasions.

Dortmund have had a frustrating start to 2019/20 overall, however, and find themselves down in sixth place in the standings following Friday’s 3-3 draw with Paderborn.

Sancho scored one goal and set up another in that entertaining meeting at Signal Iduna Park, but he is not entirely happy with life at Dortmund at present.

The Athletic write that the England international feels “humiliated, scapegoated and unprotected” after a series of incidents stretching back several weeks.

Sancho was dropped from the Dortmund team to face Borussia Monchengladbach last month after returning back late from international duty.

He was then substituted after just 36 minutes of BVB’s crunch clash with Bayern Munich a fortnight ago, a game which ended in a 4-0 defeat for Lucien Favre’s side.

Nevertheless, Sancho does not want to leave Dortmund in the January transfer window, preferring instead to wait until next summer before deciding his next move.

Barcelona, Liverpool, Manchester United and Real Madrid are the four clubs leading the race for his signature, although former side Manchester City have asked to kept abreast of developments.

And Chelsea, the club Sancho supported as a child, could yet enter the race as they prepare for the end of their transfer ban.

Dortmund, who trail Bundesliga leaders Borussia Monchengladbach by five points, will qualify for the knockout stage of the Champions League if they beat Barcelona on Wednesday.

Wherever Mauricio Pochettino ends up, the problems he faced at Tottenham will be the same wherever he goes

Ranked! Which Premier League team has the easiest fixtures up to New Year?