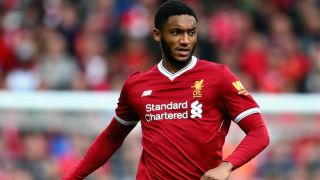 The 20-year-old has enjoyed a solid campaign for the Reds, playing 23 times in the Premier League after recovering from a serious knee problem and Achilles tendonitis.

Gomez's versatility has made him particularly useful to Klopp, who has used the defender at centre-back and right-back this term.

But he has not travelled to Rome as Liverpool look to hold on to their 5-2 first-leg lead, with a knock suffered early on against Stoke City on Saturday ruling him out.

"Apart from the long-term injuries, only Joe is not here," Klopp told Liverpool's official website.

"He had a little bit of a setback in the early stages of the last game. He came through somehow, to be honest, but after the game the injury was still there so we've left him at home.

"It's only a little setback for Joe, but we have to see how long he will be out for. I don't know at the moment.

"Apart from that, I think we are pretty complete. We have 20 players plus three goalkeepers, but a lot of kids are involved and Adam Lallana is here, too.

"[Henderson and Alexander-Arnold] have had a two-day recovery and today will train normally. Alberto got a little bit of a knock. We will see, but it looks like he can train tonight. The rest should be available."