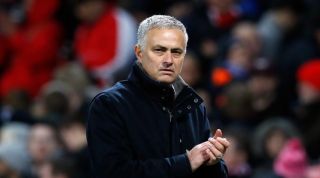 The former Chelsea and Manchester United manager has been out of work since he left Old Trafford.

Besides some stints as a pundit, including working for Sky Sports this season, Mourinho has seemingly struggled to find a route back into football.

But as the season has progressed, Mourinho has been keeping an eye on appealing positions that are beginning to arise.

The hot seat opened up at Lyon recently after Sylvinho was sacked following their defeat to fierce rivals Saint-Etienne.

Mourinho was on Aulas' hitlist as a potential successor and offered the role, but is said to have turned it down.

Aulas revealed in a telephone press conference that the reason Mourinho rejected his proposal was that the Portuguese coach has found another management opportunity elsewhere.

Breaking | Lyon President Aulas confirms in a telephone press conference this morning that José Mourinho turned down the vacant managerial role because he's about to take a new job elsewhere.— Get French Football News (@GFFN) October 10, 2019

Aulas said: "We had some fairly flattering exchanges over SMS. It was nice for everyone.

"He did not accept our proposal to meet because he has already chosen another club."

Mourinho has been linked with a move back to Real Madrid in recent weeks after he claimed his time there was his best experience as a manager.

The pressure is building on Zinedine Zidane after a loss to Paris Saint-Germain and draw with Club Brugges in the Champions League.

It's also been reported that the self-proclaimed 'special one' may be a candidate to take over from Mauricio Pochettino at Spurs.

The Argentine has been cagey over his future in north London and has also been linked with the Madrid job.

The unthinkable option would be a return to Manchester United, who are yet to see better days since Mourinho's departure last year.

10 managers whose reputations were ruined in the Premier League