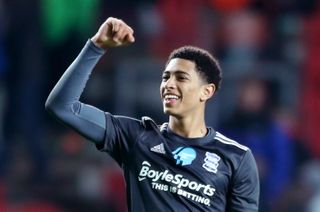 Borussia Dortmund’s Jude Bellingham has been handed his first England Under-21 call-up.

The midfielder is in the squad for the Young Lions’ Euro 2021 qualifiers in Kosovo and Austria next month.

Bellingham moved to Signal Iduna Park from Birmingham in July for an initial £25million to make him the most expensive 17-year-old in history.

Chelsea’s Callum Hudson-Odoi returns to Aidy Boothroyd’s squad having been with the seniors for the last international meet 10 months ago.

Boothroyd said: “We’re all really looking forward to meeting up for the first time since November.

“We have two testing away matches against our closest rivals in the group and it’ll be a good opportunity for the players to come together again, even if it will be an unusual experience with no crowds at either of the fixtures.

“We had a 2-0 home victory against Kosovo in Hull a year ago and I remember they made things difficult for us with a disciplined defensive performance.

I’m happy to announce that I will be joining Borussia Dortmund at the end of this season. I’m very excited about this next chapter of my journey at this great club and hope to achieve many successes in the future with my new teammates and for the amazing fans!🖤💛#HEJABVB@bvb09pic.twitter.com/wrgsRReuxr— Jude Bellingham (@BellinghamJude) July 20, 2020

“After that, we played really well in a 5-1 win against Austria in Milton Keynes, which I’m sure our hosts will want to make amends for when we make the return trip.

“We know we are in good shape for the qualification and this is a hungry squad that have a great opportunity in front of them with next summer’s finals not too far away.

“We have to get the job done first and these will be two tough fixtures. I am looking forward to seeing the players again and helping them with another key stage in their development.”

Goalkeeper Aaron Ramsdale, fresh from his £18.5million return to Sheffield United, is included along with Arsenal’s Reiss Nelson, Eddie Nketiah and Bukayo Saka.

QPR’s Ebere Eze, who is expected to move to Crystal Palace, is also in while Liverpool forward Rhian Brewster is selected and Brentford’s Josh Dasilva earns his first call.

The Young Lions resume their qualifying campaign behind closed doors on Friday, September 4 when they face Kosovo in Pristina before heading to Ried im Innkreis to play Austria on Tuesday, September 8.

The Austrians are level on 12 points with unbeaten England at the top of Group Three, although have played a game more.