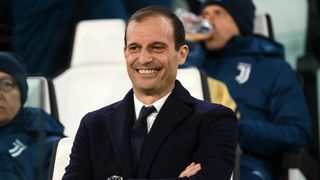 Juventus secured a seventh straight Serie A title with a 0-0 draw against Roma at the Stadio Olimpico on Sunday.

The Bianconeri completed an unprecedented fourth successive domestic double, having beaten AC Milan 4-0 in the Coppa Italia final just four days ago, with a drab stalemate in the capital in which Radja Nainggolan was sent off after two yellow cards in quick succession.

Napoli's 1-0 victory at Juve on April 22 put them one point behind the defending champions with four fixtures remaining, but Maurizio Sarri's side lost to Fiorentina and drew with Torino in a pair of fatal blows.

And the Partenopei's challenge for a first Scudetto since Diego Maradona's 1989-90 vintage is over for another season, despite a 2-0 win at Sampdoria.

Juve's domestic dominance began under Antonio Conte, who won the league for three successive seasons before his departure in 2014.

Allegri has now surpassed his predecessor with a fourth championship in a row, with his exploits in Turin leading to him being linked with a switch to Arsenal as a replacement for Arsene Wenger.