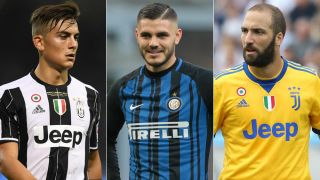 Juventus and Inter Milan's clash on Saturday could prove crucial to the Serie A title race, but the outcome of the personal battles at Allianz Stadium could reverberate to the international stage.

Gonzalo Higuain, Paulo Dybala and Mauro Icardi will all be aiming to take centre stage as they jostle for places among a star-studded Argentina squad bound for next year's World Cup.

Dybala and Icardi appear to have the inside running although Higuain, overlooked for recent squads, has the pedigree to force his way back into Jorge Sampaoli's plans and has received the backing of Lionel Messi.

Using Opta data, we take a look at how the three Albiceleste stars compare ahead of Derby d'Italia.

ICARDI, DYBALA ON THE MARCH

But while Icardi and Dybala have both significantly enhanced their output this term, Higuain's goals-per-game ratio has marginally dropped from 0.73 to 0.70.

Indeed, Icardi has been the most productive of the three domestically this term, leading his side's Scudetto charge with an impressive 16 goals in 15 games.

Perhaps explaining Higuain's reduced number of goals is the greater role he has taken on as a provider for the champions.

Dybala still tops both categories with 0.24 assists per game and 2.08 chances, while Icardi is some way behind in third - the ex-Sampdoria striker's prolific scoring means he is providing only 0.07 assists per game.

The World Cup is a rigorous physical test at the end of a long season and Sampaoli will want to know his players are up to the test.

Higuain, a member of the squad that went all the way to the final in 2014, proved his robustness by playing a part in all 38 games of Juve's successful Serie A campaign in 2016-17.

Few concerns can be raised over Icardi after he notched up 34 appearances, while fellow 24-year-old Dybala missed seven, and has already operated as a substitute on three occasions this season.