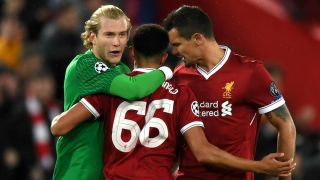 Loris Karius has warned the Champions League quarter-final tie with Manchester City could turn against Liverpool just as quickly as it swung in their favour.

The Reds are in the driving seat following a stunning 31-minute blitz at Anfield that saw them take a commanding 3-0 first-leg advantage.

Though they will be without suspended captain Jordan Henderson for Tuesday's trip to the Etihad Stadium, the buffer is expected to be enough for a team who have kept five clean sheets in their last seven competitive matches.

Goalkeeper Karius, however, insists Liverpool cannot afford to waiver from the performance-first mentality that laid the platform for last week's victory.

"Obviously [it was] a great game from us. You never know what to expect, we were just trying to play our best game," the German told Liverpool's official website.

"That's what we did and got a really good result. The fans were great, pushing us on the whole time.

"But it's not the time to celebrate yet because, like you could see [at Anfield], it could go in one direction really quickly, so we need to be switched on in the second game to avoid that and go through."

In-form forward Mohamed Salah trained on Monday and is considered likely to be available for Jurgen Klopp after sitting out the 0-0 weekend draw with Everton due to a groin problem.

'The other 'keepers are pushing Karius - and it's working.'The competition in 's goalkeeping ranks has contributed to Karius' excellent form, according to James Milner: April 8, 2018