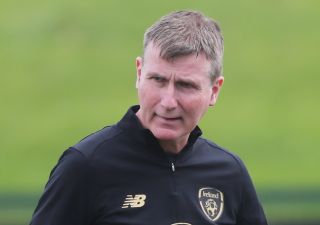 Stephen Kenny will attempt to open his Republic of Ireland account with the first victory of his reign when Finland arrive in Dublin on Sunday evening.

The new manager was spared defeat in his opening fixture when Shane Duffy’s stoppage-time header rescued a 1-1 draw in Bulgaria on Thursday night.

Here, the PA news agency takes a look at some of the talking points as Kenny prepares to send out his team at the Aviva Stadium.

Turning on the style

Kenny was as good as his word when, having vowed to play a more expansive brand of football than some of his predecessors, he picked a side against the Bulgarians designed to do just that. The reviews were mixed, but there was little doubt Ireland enjoyed a greater share of the possession than they have done in the recent past with James McCarthy anchoring a midfield trio behind a front three of Aaron Connolly, Adam Idah and Callum O’Dowda, a system which is likely to become the default.

The inclusion of 19-year-old Norwich frontman Idah was both a reward for the teenager’s success with the under-21s under Kenny’s charge and a reflection of the continuing search for a prolific goalscorer, one which has been ongoing largely ever since Robbie Keane retired from international football in 2016. Idah’s pace, power and link-up play are the weapons Kenny hopes to utilise and there were flashes of his talent on show in Sofia. Sheffield United striker David McGoldrick joined up with the squad on its return to Dublin, although short of match fitness after a foot injury, so the youngster may yet get another chance.

The new regime’s desire to play attractive, effective football is laudable and fans who have often watched Irish teams having to grind out results in recent memory will be delighted if they can come up with a way of winning in style. But they must also not forget their existing strengths and for all there were encouraging signs in Bulgaria that they may be able to play in a different way, it was ultimately a fine Robbie Brady cross and a towering Shane Duffy header which got them a point on the night.

Changing of the guard?

Perhaps the most significant decision Kenny took ahead of his first game was to leave captain Seamus Coleman sitting on the bench. The clamour for Tottenham’s new signing Matt Doherty to be installed as first-choice right-back was answered when he got the nod at the Vasil Levski Stadium, and there could be few arguments given the form of the two players. However, Coleman has been a fixture in the Ireland team, when fit, since 2012 and the 31-year-old is unlikely to give up his place on a sustained basis without a fight.

Ireland will not have to look too hard to identify Finland’s dangerman. Striker Teemu Pukki scored 10 times as the Finns secured their passage to the delayed Euro 2020 finals, a record bettered only by England’s Harry Kane, Portugal skipper Cristiano Ronaldo and Israel’s Eran Zahavi. Pukki scored 11 times for Norwich in the Premier League last season, but six of those came in his first five games and he will exploit the kind of defensive lapses of which the Republic were guilty in Sofia if they repeat them on home turf.