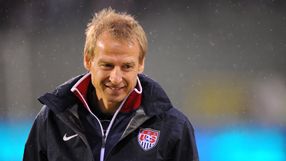 The 22-year-old, Karlsruhe-born Williams, a defensive midfielder with Bundesliga club Hoffenheim, is eligible to play for either his country of birth or his father's homeland - the U.S.

"The coach at Hoffenheim is full of compliments and admiration for Danny, and I really want him to come in and get a first feeling for this group of players on the U.S. team," said Klinsmann.

"He's a player with a huge upside in the next couple of years. If it's possible to integrate those elements into a camp then we will continue to do that. Talking to his coach at Hoffenheim confirms he's ready for this step," he added.

Klinsmann has said he is looking to dual-citizen players as a potential source of new recruits to his team and another German born player, full-back Timmy Chandler is also included in the squad.

Another Bundesliga player eligible for the U.S., Fabian Johnson, was called in to train with the team last month while his paperwork for a nationality switch was being dealt with by FIFA. Johnson, who has recently had a neck injury, was not named in the latest U.S. squad.

"Fabian is still recovering from the injury he suffered in training a couple weeks ago. The good news is he has received approval from FIFA for a change of association. He is now a U.S. player, and we look forward to having him back with us as soon as possible," said Klinsmann.

Sporting Lisbon central defender Oguchi Onyewu returns to the team for the first time under Klinsmann along with Canada-born forward Teal Bunbury.

Michael Bradley, son of former U.S. coach Bob Bradley, returns to the squad after missing September's friendlies while he arranged a transfer to Italy's Chievo Verona.

The U.S. will face Honduras in Miami on October 8 and then Ecuador, three days later, at Red Bull Arena in New Jersey.

Klinsmann is looking for his first victory since taking over from Bradley at the end of July.

Under the charge of the former German national team coach and ex-Bayern Munich player and coach, the U.S. has drawn with Mexico and lost to Costa Rica and Belgium in friendlies.

The coach has experimented in those games but his selection changes have been more limited for the October games.

"One important thing is to see continuity in the build-up of our national team and also in the way we work as coaches," said Klinsmann.

"We'd like to see new faces as well, but we also don't want to shake up the core structure of the team too much. The two results with Costa Rica and Belgium didn't work in our favor but we saw clearly that the team started to understand what we demand from them in terms of pace, playing style and how to play.

"We are definitely on the right path and what we now need to focus on in this get together is the eagerness to finish things off up front," he said.